Will I get Alzheimer’s disease? Everything you need to know about the ApoE gene!

You are here:
Health & Fitness

Alzheimer’s disease (AD) is a progressive neurodegenerative disease that involves gradual cognitive decline.  About 13% of people over 65 years old have Alzheimer’s disease and nearly 45% of people over the age of 85 have it.  (Source)  Much evidence points to an imbalance in production and clearance of beta amyloid plaque in the brain.  These toxic plaques injure neurons and lead to dementia and memory problems.  The toxicity of amyloid depends on phosphorylated proteins called Tau.  We now know there may be other triggers to amyloid production including toxic exposure and infections.  Some of these include borrelia, herpes simplex type 1 and 2, chlamydia pneumonia, h. pylori and others.  Early onset Alzheimer’s disease typically occurs in patients less than 65 years old and may be related to gene mutations in APP, presenilin 1 and presenilin 2.  However, the majority of Alzheimer’s cases still occur in patients over 65 years old, commonly referred to as late-onset Alzheimer’s disease or LOAD.

So what is ApoE?

ApoE regulates cholesterol by mediating transport from one tissue to another.  In peripheral tissues, ApoE is primarily produced by the liver and macrophages and aids in transporting cholesterol.  ApoE4 is associated with high cholesterol, heart disease and stroke as well as Alzheimer’s disease.  In the brain it is mainly produced by astrocytes and transports cholesterol to neurons, causing abnormal transport of cholesterol in brain.  Proper levels of cholesterol and transport of this substance is essential for proper memory. Studies show that ApoE 4 genotypes strongly affect deposition of beta amyloid  forming senile plaques and cause cerebral amyloid angiopathy (CAA) where amyloid is deposited in the cerebral blood vessels.  Both of these things are classic findings in the brains of those with AD.  ApoE4 seems to have pro-inflammatory effect and decreased ability to thwart oxidative stress which could further exacerbate AD pathology.

Role of ApoE 4 in Alzheimer disease

Patients who have ApoE 4/4 have a very strong genetic risk for development of Alzheimer’s disease. This association is weaker among African Americans and Hispanics and stronger in Japanese people compared with Caucasians.  ApoE 4/4 is associated with high incidence of AD at a younger age.   It is clear that this gene dramatically increases risk of development of AD.  The frequency and average age of onset are as follows:

ApoE 4/4 is associated with impaired memory performance and increased risk of memory decline in middle-aged (40–59 years) and elderly (60–85 years) people with mild cognitive impairment (MCI). MCI is defined as a noticeable and measurable decline in cognitive abilities, including memory and thinking skills. Someone with MCI is at an increased risk of eventually developing Alzheimer’s disease.   Furthermore, recent research demonstrated that, independently of amyloid plaques, this gene triggers inflammatory cascades that cause brain dysfunction, including blood–brain barrier breakdown, leakage of blood-derived toxic proteins into the brain and reduction in the length of small vessels.  Similar to “leaky-gut” this has often been called “leaky-brain”. 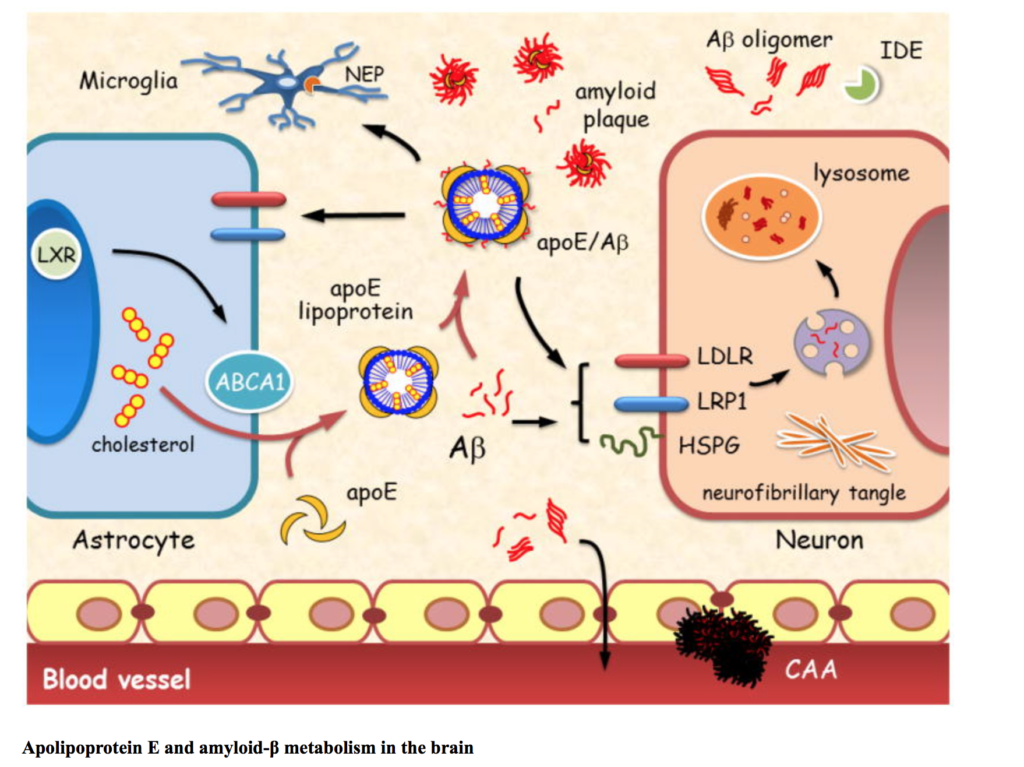 Preventive of cognitive decline those with APOE 4 genetics

Dementia is negatively associated with higher education level, more leisure activity and less stress, and lack of cardiovascular risk factors, like healthy diet.   Physical exercise was strongly associated with reduced risk compared to sedentary lifestyle.  Recommendations if you happen to have ApoE 4 may include a mildly ketogenic diet Mediterranean style diet with focus on plant-based organic foods and coconut oil.   In addition there are many antioxidants that may also protect the brain including the following:

Regardless of if you find yourself a carrier of one or more copies of ApoE 4, you can still live a healthy lifestyle and incorporate many things that will decrease your risk of developing AD.

Emily Parke, DO, is board certified in anesthesiology and pediatric anesthesiology, trained in medical acupuncture, and specializes in Functional Medicine.

How Inflammatory Bowel Disease Affects the Digestive System
May 14, 2020

We seek to do this with passion, compassion, and education, as well as spending adequate time learning each patient’s unique story.

Our goal is to guide each patient through their own journey in achieving optimal health by providing them with the highest quality, personalized, natural healthcare possible.

Sign up for the Arizona Wellness Newsletter with Dr. Emily Parke. Stay up to date with the latest wellness news, recipes, and blogs.